skip to main | skip to sidebar

We seek your leadership. But if for some reason you are not willing to lead, leave it to the rest of us. Please get out of the way.

-Kevin Conrad, a Papua New Guinea delegate addressing the Unites States
delegation at the end of the UN Climate Change Conference in Bali.

Well it ain't Kyoto, but it's a start. The United States has grudgingly accepted a compromise to agree to negotiate over the next two years (when worded like that, it doesn't sound like much of a start, now does it?).

BALI, Indonesia (CNN) -- In a dramatic reversal Saturday, the United States rejected and then accepted a compromise to set the stage for intense negotiations in the next two years aimed at reducing carbon dioxide emissions worldwide.

The White House, however, said in a statement that it still has "serious concerns" about the agreement.

"The negotiations must proceed on the view that the problem of climate change cannot be adequately addressed through commitments for emissions cuts by developed countries alone. Major developing economies must likewise act," the White House said.

Under the global warming pact, negotiating rounds would end in 2009.

The head of the U.S. delegation, Paula Dobriansky, undersecretary of state for democracy and global affairs, announced the United States was rejecting the plan. Her comments were met by booing from other delegations.

The White House said the negotiations must "clearly differentiate" and link responsibility with the level of emissions, size of the economy and energy use among developing countries.

Read the rest of the article HERE.

When will the US jump to the front of the parade? Well, just so you have an idea how ridiculously extreme our non-participatory attitude can be, here's an interesting infographic that shows Kyoto ratification. Sing it with me, "One of these things is not like the other."

The United States was, as of 2005, the largest single emitter of carbon dioxide from the burning of fossil fuels.

The U.S. Senate unanimously passed by a 95–0 vote the Byrd-Hagel Resolution (S. Res. 98), which stated the sense of the Senate was that the United States should not be a signatory to any protocol that did not include binding targets and timetables for developing as well as industrialized nations or "would result in serious harm to the economy of the United States."

Although Bush won't sign it because he's unsure of the reality of climate change, Clinton is just as guilty for never submitting the protocol to the Senate for ratification. At least our idiocy is non-partisan.

The United States has, however, signed the Asia Pacific Partnership on Clean Development and Climate; a similar (but non-enforceable) pact. The pact vows to reduce the US carbon intensity by 18% before 2012. Ironically, 18% is actually an increase in carbon intensity.

As of this year, the following states actively participate in state-level cap and trade emissions programs similar to the Kyoto Protocol: Maine, New Hampshire, Vermont, Connecticut, New York, New Jersey, Delaware, Massachusetts, and Maryland. Pennsylvania, Washington DC and Rhode Island actively observe the protocol, and California has signed their own Global Warming Solutions Act. That means 26% of the US is already observing the treaty (just 2% points shy of Bush's October approval rating).

Here's another infographic to get you going... 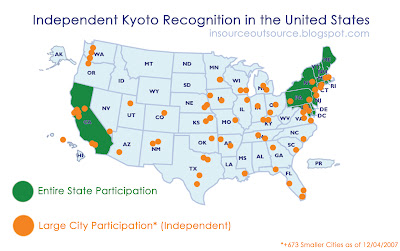 So why haven't we ratified?
Posted by J Thornburg at Wednesday, December 19, 2007

This site is not affiliated with my work and/or its clients and/or its vendors. The views expressed in this blog are solely the opinions of me, myself and I.

1) Everything is meant in good fun.
2) At this time, there is just too much cool stuff on the interwebs and this is my way of keeping track of it all.
3) My intent is to better familiarize myself with an industry I am only beginning to understand.

Your Source For Me

J Thornburg
Columbus, OH, United States
Well, where to begin? I graduated from Eckerd College in 2000 [St. Petersburg, FL] with a BA in International Law with a Concentration in Human Rights and Genocide Studies. After college I joined the Peace Corps, serving in the Republic of Kiribati in the South Pacific [2001-2003]. I am currently a Buyer for a design in OH.********As the world continues to accelerate and evolve, I am growing more and more fascinated with technology and design. Since I am not formally trained in either of those fields, this blog aims to showcase products/ideas/tech/people I like. Take it for what you will.********Lili Cheng once wrote, "A beautiful side effect of making things is you start to look around and wonder, 'how did they do that?'; you learn to see, analyze, and appreciate different approaches, well-made things, and clever solutions." Surrounded by creativity and cleverness, I can't help but find myself intrigued. I have a wonderful wife and a healthy-boweled 1 year-old son.