skip to main | skip to sidebar

The Palo Alto, California-based company, Bike Arc, was born out of a shared reverence for the bicycle and the environment. The design evolved from the collaborative efforts of celebrated U.S. bicycle advocate Jeff Selzer and Joseph Bellomo, an architect renowned for his leadership in holistic, green design. Bellomo and Selzer worked together on the Palo Alto Bikestation at the Caltrain depot. Bike Arc is patented in both the United States and in Europe.

The concept of the Half Arc stemmed from the need to offer cyclists’ security as well as weather protection for their bicycles. Using the Arc design from the original Bike Arc, the Half Arc once again offers outstanding security in a light, small footprint. 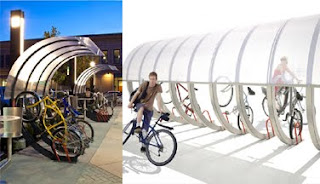 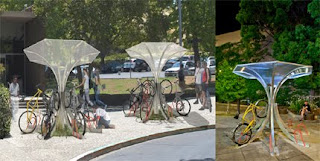 The Tube Arc is the flagship of the Arc offerings. Each of the other Arcs was born out of this modular elegant design. The Tube Arc offers exceptional security, ease of use, and complete protection for the bicycle from the elements. The design was conceived to offer flexible, easy-to-install (assembled on site) bicycle parking structures with a “light” approach. The Tube Arc is adaptable from 16 bikes to upwards of 60+ per unit.

The Rac Arc was designed to offer basic, affordable, and attractive bicycle parking. It is a unique design that organizes and honors the bicycle while offering superb security. The design offers a variety of configurations adaptable to commercial and public realms, but is equally effective for use in a single-family home. The Rac Arc can also cantilever over existing or proposed landscaped areas. 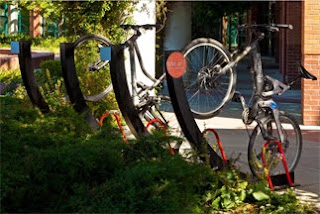 The Loop Arc offers simplicity, affordability, and usability. Similar to the rest of the Bike Arc family, it maintains the organization of bicycle parking by providing each bike a designated “parking spot.” As the Loop Arc is two separate pieces, one that supports the front wheel and one that locks to the frame and back wheel, it can be used in a variety of locations and situations including sloped areas or on uneven ground. The Loop Arc works with all different types of bikes (including those with baskets) and no lifting is required.

The Car Arc provides covered shelter for vehicles including electric cars and electric bicycles. The structure is formed from the same curved 1”x3” tubes as the rest of the Arc family, but further extruded to provide enough protection for the entire length of a car. On top of the polycarbonate roof is a layer of solar film, which captures solar energy and converts it into power for the vehicles. The Car Arc is an affordable solution that has the potential to be used in commercial, public, and residential applications and can also be added to an existing car park to provide shelter due to its light load.

The Bus Arc is a further iteration of the Half Arc, generating both a bike storage facility and a waiting area. Recycled resin sheets are rolled and simply attached to the steel ribs, allowing people to sit under protection. An added benefit are the energy inverters, which produce energy that users can plug into while waiting for the bus.

The Ad Arc is a street level barrier screen that has the potential to display a variety of imagery depending upon the use. Each screen is fabricated from galvanized steel flat bars (fixed Ad Arc) or aluminum (removable Ad Arc) framing a transparent polycarbonate printed screen. Each panel can be easily and affordably replaced on a regular basis allowing users to frequently update their display such as a restaurant owner revising a menu or retail products. The size of the seating screen is also flexible, ranging from 2’ to 4’ in length and 3’ to 5’ in height to fit into every application.

The Transit Arc promotes bicycle routes along transit corridors providing safe and continuous bike commute corridors. For example, we believe there is an opportunity for bike connections to exist alongside electrified commuter train corridors with high-speed trains elevated aesthetically beautiful above such as the San Jose to San Francisco new High-Speed Rail and Caltrain.

The House Arc is a modular off-the-grid housing solution where the pieces are shipped (ideally, fabricated locally) to the site and erected by the user or community. The first House Arc prototypes to be built will be on the Big Island of Hawaii; completion is anticipated in 2009. We hope organizations dedicated to finding the most affordable off-the-grid modular housing solutions will consider the House Arc. 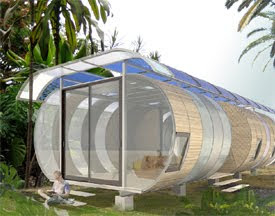 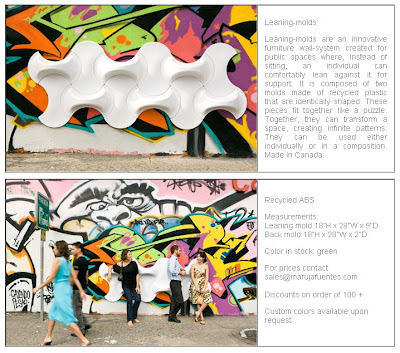 I don't know about the elbow rest portion, but the sitting spot has excellent potential for bus stops, DMV's and the like. That is to say, potential for very hip versions of those places.
Posted by J Thornburg at Thursday, March 26, 2009

Chew with your lights on... 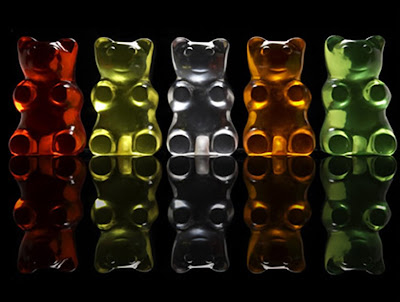 Around 7" by 4" wide and come in various colors. They have a 20-hour lithium battery, so no cord is needed. Place them anywhere in your German candy factory.

via Property Furniture.
Posted by J Thornburg at Monday, March 09, 2009

Objectified is a feature-length independent documentary about industrial design. It’s a look at the creativity at work behind everything from toothbrushes to tech gadgets. It’s about the people who re-examine, re-evaluate and re-invent our manufactured environment on a daily basis. It’s about personal expression, identity, consumerism, and sustainability. It’s about our relationship to mass-produced objects and, by extension, the people who design them.

Through vérité footage and in-depth conversations, the film documents the creative processes of some of the world’s most influential designers, and looks at how the things they make impact our lives. What can we learn about who we are, and who we want to be, from the objects with which we surround ourselves?

If only it were this easy... 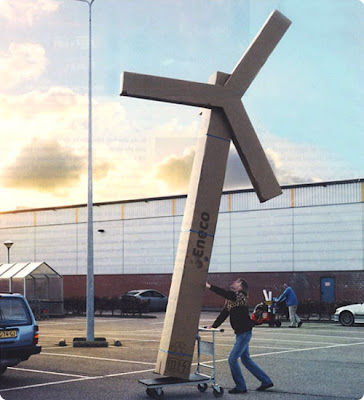 It's a whole new world, hopefully...

Obama: the post-environmental president
What does the election mean for climate change and energy policy?
by Adam Stein – November 5, 2008
There’s been a bit of chatter in recent weeks about whether an Obama victory would truly be as transformative as many progressives hope and expect. Some have quietly suggested that nothing in Obama’s record, temperament, or platform should make us expect dramatic gestures. They say that those who think otherwise are letting the man’s remarkable personal story cloud their judgment of his governing philosophy, or discounting the extent to which every president is constrained by Congress.

There’s something to this, and ultimately any president’s legacy is determined as much by events as by his or her personal qualities. That said, I think that Obama’s presidency has a good chance of being a transformative one, particularly in the area of climate and energy. Circumstances have delivered up a set of interlinked crises — economic, environmental, and security-related — at just the moment that we’ve elected a person who seems to fully grasp the scope of the problem and the proper shape of the solution. 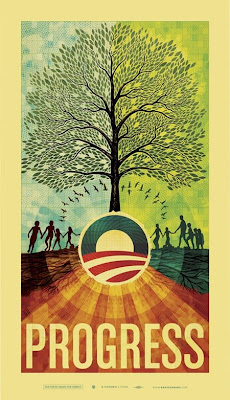 Obama has often been referred to as the first post-racial politician. When we someday evaluate his tenure, we may come to see him instead as the first post-environmental president, the leader who was able to connect the dots on energy, the economy, and security in way that elevates these issues above narrow interest group concerns and places them at the center of the political agenda.
Read the rest of the article HERE.
Posted by J Thornburg at Wednesday, November 05, 2008 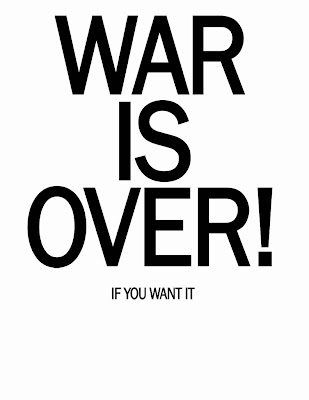 Labels: War is over

Google gives your ideas an allowance...

Project 10 to the 100th is a call from Google for ideas to change the world by helping as many people as possible. On February 27, Google will choose the best 200 ideas, donating $10 million to help with their implementation. Deadline for submissions is October 20th.

Criteria:
Reach: How many people would this idea affect?
Depth: How deeply are people impacted? How urgent is the need?
Attainability: Can this idea be implemented within a year or two?
Efficiency: How simple and cost-effective is your idea?
Longevity: How long will the idea's impact last?

This site is not affiliated with my work and/or its clients and/or its vendors. The views expressed in this blog are solely the opinions of me, myself and I.

1) Everything is meant in good fun.
2) At this time, there is just too much cool stuff on the interwebs and this is my way of keeping track of it all.
3) My intent is to better familiarize myself with an industry I am only beginning to understand.

Your Source For Me

J Thornburg
Columbus, OH, United States
Well, where to begin? I graduated from Eckerd College in 2000 [St. Petersburg, FL] with a BA in International Law with a Concentration in Human Rights and Genocide Studies. After college I joined the Peace Corps, serving in the Republic of Kiribati in the South Pacific [2001-2003]. I am currently a Buyer for a design in OH.********As the world continues to accelerate and evolve, I am growing more and more fascinated with technology and design. Since I am not formally trained in either of those fields, this blog aims to showcase products/ideas/tech/people I like. Take it for what you will.********Lili Cheng once wrote, "A beautiful side effect of making things is you start to look around and wonder, 'how did they do that?'; you learn to see, analyze, and appreciate different approaches, well-made things, and clever solutions." Surrounded by creativity and cleverness, I can't help but find myself intrigued. I have a wonderful wife and a healthy-boweled 1 year-old son.